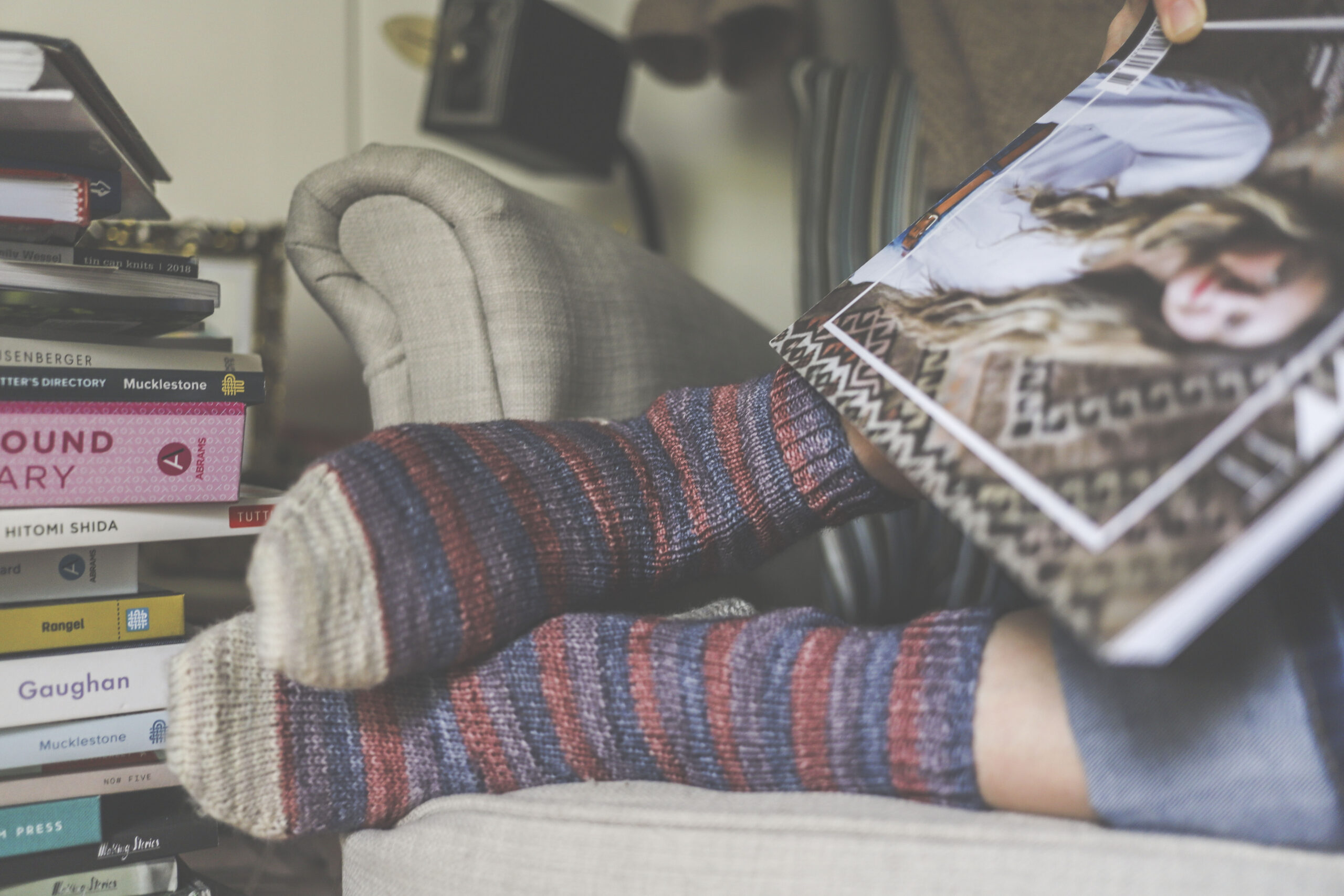 Warning: Gonna get pretty personal with this post. Of course, because it’s about socks(?). I started writing it over a year ago to discuss this yarn, named after me, and thoughts about myself as I knit with it. However, I was working on it in the hospital at the end of my dad’s life and I found it difficult at that time to untangle thoughts about myself with my feelings about his passing. I mean, life, death…socks? Didn’t seem appropriate. For a year the post just sat in my drafts, until it almost seemed ridiculous to post it at all. And you may well find it overly spiritual or ridiculous. But a project named after me seemed to deserve a peek into my thoughts at that time in my life, however messy they may be. Besides, a blog isn’t really a journal unless you let it be, right? Pattern notes are at the bottom if you want to skip the weighty, spiritual stuff.

Julianne of Lovebird Lane Yarns has a collection of yarns based on some of her favorite podcasters and, believe me, you cannot be more surprised than I was to see I was among them. I was delighted with the Michelle colorway and how well she “got me.”

The lightweight part of feeling shy is the awkwardness. I love this colorway, yet feel so awkward that my name is on it. I love Julianne! And I love when someone really sees me, but I still have trouble with the actually being seen part. I feel such temptation to water my thoughts down here, to just talk about the pretty colors and not show any intensity of personality. I used to call it shyness but my kids’ would probably call it social anxiety. That’s a little formal for me. I’d prefer cat lady.

Why do I feel shy because someone is “claiming me” publicly?
This is after twenty- something (now forty-something) podcast episodes of myself talking online about knitting, death, cheesy shows, and dogs, all with a zit somewhere on my face.

I think it’s because I don’t feel worth claiming. I haven’t felt worth claiming most of my life. I always felt a little out of place in every social situation. That’s the heavy part of being shy. I wasn’t born that way. I was born outspoken, if cross. Somewhere along the way, in the dysfunction of family life after a parent dies, I internalized everything. Felt responsible for everything. And felt joy never.

My solution, when I was my kids’ age was to think of what a normally adjusted person would do in a situation, then force myself to do that, trusting that eventually the feelings of self-worth, or normality, would come. Usually these endeavors were to benefit someone else. If I was using valuable space in this world, I could at least be of service. I often wondered if I was doing it right, because I only felt something on the spectrum of shame: from mildly awkward to complete loser. I now am mid-forties. Though I care a whole lot less about how I am perceived, the discomfort can still be there. Still! I don’t want to fake it ’til I make it anymore. How did this even happen to me?

My dad said he was so shy as a boy that when visitors came to their house, he would hide behind the couch…the whole time. I imagine trying to sit still, while cramping with the dust or dog hair behind our couch during one of my parents longest of visits with a neighbor. That’s pretty intense. Of course, he grew out of that. By the time I was born, he led hundreds of workers in organized labor strikes. So I knew there was hope for me.

…Now I’m just thinking about Dad again. But he was a part of this strange time in my life. Being there for him, at the end of his, required being around another person who had hurt me when I was young. I was leaning over Dad’s hospital bed, holding his hand and praying, without realizing my bent back may have looked like an old, familiar target to them. We are creatures of habit and where one perceives weakness, their habit may be to exploit it. I didn’t fully understand what was happening around me until I went home one night to pray and gather my thoughts.

It’s like I took some of the darkness that was in that room home with me. A cloud of shame I hadn’t worn in many years, covered my shoulders again like it had always been a part of me.
As I lay down to sleep that night, I saw it. Really saw it. And all the emotions and beliefs that came with the shame imposed on me (pain, sorrow, unworthiness, guilt) hit me as forcefully as it did when I was a kid. I’m thinking- what is going on? Are my emotions just all over the place because my dad may die?  I hadn’t felt this way in years. But as I lay in bed just feeling those exact same things I felt and thought as a teenager, I realized  this wasn’t me. It wasn’t a natural part of my coming of age back then. All those nights and days I sat in my room feeling paralyzed, afraid to come out and draw criticism, wasn’t my overly emotional nature. The belief that I should never have been and every dark thought it produced was not just teen angst. It wasn’t just because my mother had died. It was a particular influence, or presence, in my life that I believed was correct because I was a child and they were an adult.

I tend to think we make our own problems for ourselves, until it comes to someones problems around me, then I tend to wonder if I caused them. That sound you hear is me laughing at my double standard. But, in general, I am cautious about assigning blame for our shortcomings to some other entity. A lot of Christians do. Do you have any Christian friends like this? Do you see them as “eccentrics” who talk to nothing? Sometimes they entreat the good nothing and sometimes they cast out a bad nothing? Well, this was not nothing. It was real. The hair on the back of my neck was raised, which is saying a lot for someone as tired as I was. But being tired and grieving so much, I had nothing of myself to give to this nonsense. I saw it for what it was. Sure, it was the lies that smothered my joy from the time I was 14, delivered through one person’s ugly looks and cruel slights. But it was beyond this one person’s actions. It was the spiritual and universal shame I think so many people experience. It is a force in opposition to life. I sat up in bed and said, literally out loud, “You can’t have me. I’m His. I will follow Him no matter how hard things get, even if it makes me miserable. You can’t have me. Go away.” With that, I put my head on my pillow and slept, hard. My husband, I imagine, laid there wide awake in bewilderment.

I can’t believe I’m even trying to talk about this. But it was a big deal to clearly see how the  destructive lies entered my life and how powerfully I let them shape me. It was an even bigger deal to see that I no longer believed them. Not really. I still have hard days where I feel “shy” but those old thoughts rolling around in my head don’t define me anymore. I have felt a tender, gentle love from God that has soothed those hurting places.

And let me say, time does help heal to an extent. Beyond spiritual changes in myself, just seeing the effects of time on the person I once viewed as an extension of God’s harsh judgment (either a sign of His pleasure with their smile or a conduit of His rage with their own) put it into perspective. Abusers get old. I think it all began to lose its hold on me years ago, when I left home and fully committed myself to Christ’s teaching. Still, it was important that I now see the proof of it.

One last ramble. It was humbling to see the strength I have received over the years. It was also sobering to fully consider the power my words could hold over someone else’s head. We do tend to believe what we hear. Just as my replaying someone else’s unnecessarily critical words over and over in my mind can destroy, so might my bitter response to those words. I suppose I can verbally shred someone with the best of them, but I don’t want to add to the hate. I want to quick to listen and slow to speak, to think and pray. I want to recognize the hurting child inside of the people around me and soothe them. I want to encourage them to overcome their burdens, when I can, even if their burdens are the guilt of what they have done to another. I want everyone to know the gentle comfort I have found. I would like to mirror my creator that way, root for people lend strength to them. But that’s all “want to’s.”

As far as who I actually am today, I am not completely sure. I’m no longer shaped by the lies I heard as a girl, though the experience still tempers my thoughts. I do know, really truly know, I am loved by a good Father. I belong with someone, someone I can identify myself with and who identifies with me. Out of this place of confidence,  I think I am equipped to live a loving life, if I choose to.

Details: Er, so let’s talk socks. This was basically Susan B. Anderson‘s Smooth Operator pattern again. It feels like part of my brain now because I have worked it so many times, but no it is Susan’s idea. This is my favorite afterthought heel directions, though I have some socks ready to try the Kirby Wirby method.

I used a size 0 circular and Lovebird Lane‘s Merino sock yarn in the Michelle colorway. It was such a pleasure to work with. Soft and easy on my hands. The heels and toes were just some off white scrap yarn that I thought went well with the stripes.  They have been much worn and loved this winter!

You can find more on this project here.
And on the podcast : yarn details in Episodes 19, 20, 22, and more of the personal reflections in Episode 23)