These aren’t the greatest photos, but they were taken on a dark day, by my shaky hands, just before my daughter’s wedding shower a couple of weeks ago.  I’ve mentioned how big events make me a bit nervous.  But there was no need.  It was the absolute sweetest bridal shower, hosted by the sweetest people ever.

They were throwing this party for my daughter, but there was no denying my mother’s memory was ever present in all of the fun, with so many of the hostesses being friends of hers or relatives.  It was especially beautiful for this reason.  My grandmother enjoyed seeing her daughter’s friends and meeting friends she hadn’t known and my daughter was overwhelmed by the number of people who came to wish her well.   It made me so happy to see all of the goodwill being shown to this new couple.

I also had a killer gift for her.  I knew it was good because I almost coveted it.  Almost.

I only have two Pyrex primary colored bowls, and one is in used condition.  This, however, was the whole set… in mint condition.  It’s also the version from the 1940s.   So cool.  I was nervous about ordering them online, but the Etsy seller packaged them incredibly well and insured them, so I was relieved to open the box and find them perfect.

I added a vintage-looking recipe tin from Rifle Paper Company that included a few of my daughter’s, and her fiancé’s, favorite dishes that I make: homemade tomato soup to go with roast beef and havarti cheese sandwiches, lentil and sausage soup, enchiladas with verde sauce, etc.

I had received several great knitted gift ideas from other members of the Very Shannon group during the TTTKAL earlier this spring.  But, in the end, I went with the most practical knitted wedding gift there is: dishcloths.

I recently bought the Knit Picks 52 Weeks of Dishcloths book on sale with a yarn order.  I realize the individual patterns were offered free on a monthly basis, but I really liked having them altogether and in print.

Of all of the patterns I knit, Firefly was my favorite.  It was knit in old cotton I already had.  I’d tried to use colors that would match her dishes or look really graphic, but I think I prefer soft, bright colors for the kitchen.

Details on my dishcloth mods because I used different weight yarn on some:

Firefly– I held two strands of worsted cotton together to knit it up faster.  I only cast on 27 stitches. 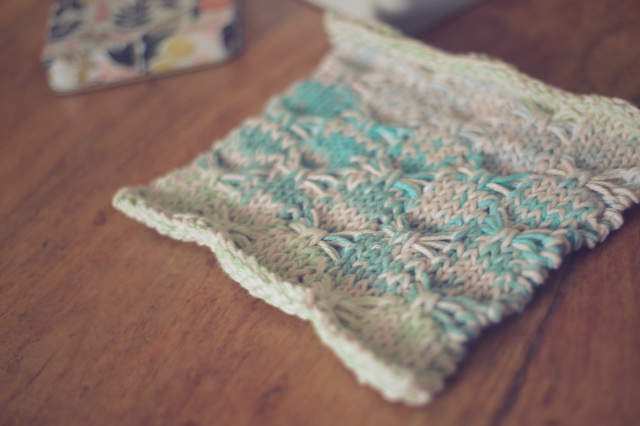 Slant– For this one, I used worsted and worked up to 50 stitches in the first color before switching to the contrasting color. 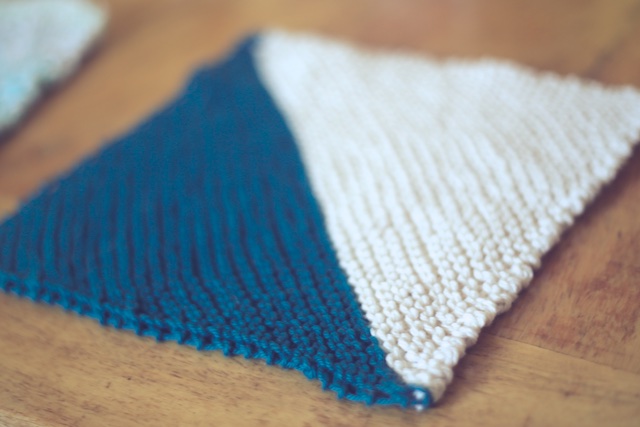 Ridge– I used worsted weight and only cast on 66 stitches.

I didn’t make any modifications for Starflower.  Isn’t it cute?

If I doubled my yarn and went down a needle size, I could make a slightly larger one that might double as a pot holder.

I rounded things out with the Nessie soup ladle, which may have pleased her most.  She is frighteningly like me at times.