Skip to content
You know you have some.  I reside in a world of knitting bloggers who love posting details about their finished knits with beautiful photos of themselves wearing them and looking off in the distance, lost in deep thoughts, and very accomplished.
But it’s a bit of a sham, with me anyway. 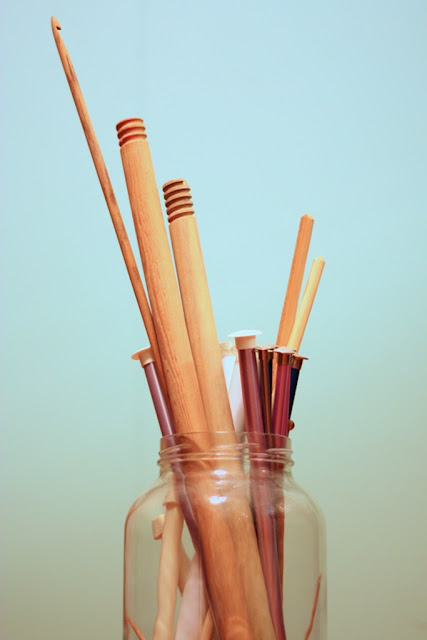 Let me just get the most humiliating of confessions out of the way, first.

1.  I’m a bit of a phony knitter.  I love to knit, but hate post-knit tidying up.  I’ve worn my Look-back Leggings for many years-  to football and soccer games,  at parades, on long walks, to another hemisphere, etc.  But I have yet to weave in all of the ends.  I know, I’m cringing too.
Exhibit A: 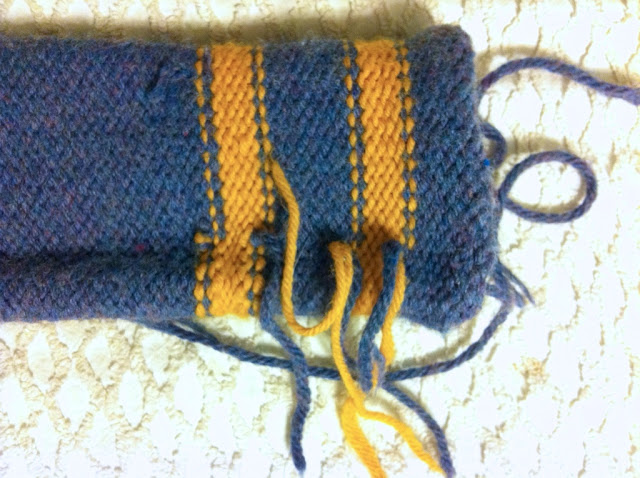 I’ve hidden loose, unwoven ends for many project photos: tucked them into leg warmers, up inside of sleeves,  down the back of necklines.  I even pinned my Corona Camisole straps to the body with hidden safety pins so I could take a “Finished Object” photo and let it double as a no-brainer 365 photo of the day.  I did, after all, intend to finish it up the next day.  It is still waiting there, folded in my closet, pins and all.   Ah, the “Finished Object” photo of a not quite finished object; am I alone in this?
2.  I’m also a terrible blocker.  Read this and this if you doubt me.  I routinely wear newly finished knits before I block them.  I don’t know, it feels all homespun that way and, after the Miracle Grow Sweater Debacle, it would seem this is the only way to make sure I get some wear out a sweater before taking a risk with washing it.
3.  The blocking thing is really only a gamble because I am a swatching newbie.  I usually swatch, but never realized that I should wash and block it before diving into a project.  That was a Homer Simpson “Doh!” you just heard. 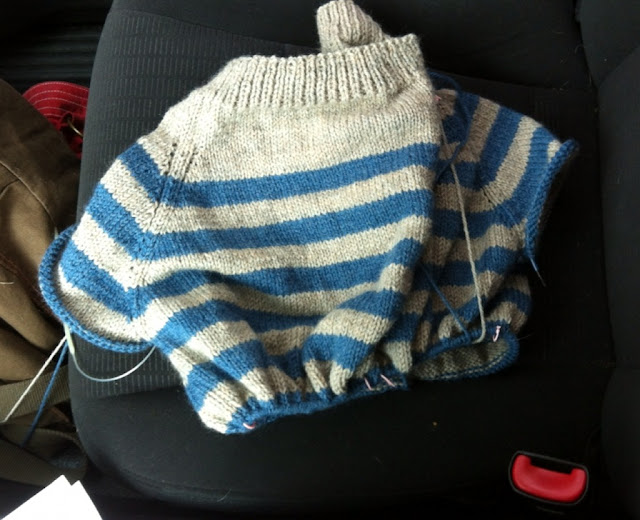 4.  I am also a knitting cheapskate, preferring cheap plastic circulars and Denise needles for everything.  This isn’t really an embarrassing confession, just a fact.  I love Denise needles.  I’ve never had anything snag on them and I abuse them with tight knitting regularly, like on the sweater above where I finally popped a cord.  (It’s not the needle set’s fault.)  I have had them for probably 9 years or more.  You wouldn’t believe how giddy I was to get the replacement cords and more needles as part of my birthday gift. 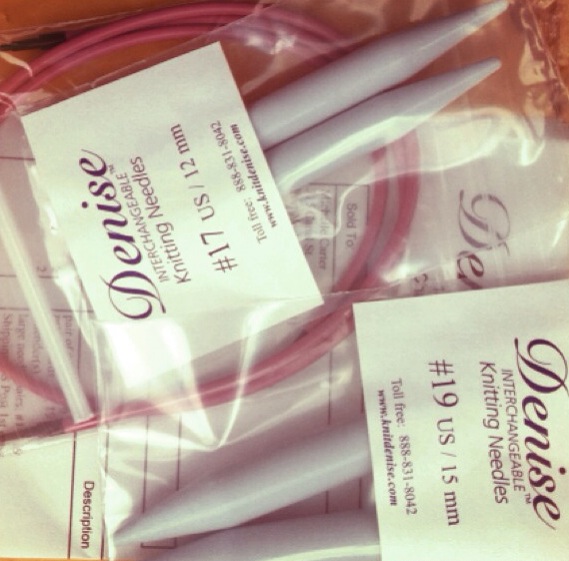 5.  Of course, cord popping is a first for me and only happened because I have another issue/skill in that I am sometimes a Death Grip knitter.  I can get a size 3 gauge out of a size 5 needle by using Knitter’s Death Grip in order to avoid buying smaller needles for the project because… well… refer to the confession above.  (Knitter’s Death Grip is where you sit hunched over and give your busy needles an Indian rope burn while wearing a maniacal expression on your face.)  But I only do it occasionally, in a pinch, because I don’t enjoy being that “wound up.”

6.  But, I can get a little wound up when I have to.  It was the same Denise needle set that showed me what a possessive knitter I am.  A few years ago, I kind of caused a scene arguing with Lan Peru airline security over my size 6 Denise needles that I’d left in my carry on.  You have to understand, I am not a scene maker.  That’s tacky and not worth it, usually.  Even as I argued with the supervisor that they were airline approved, I was surprised at how much it bothered me to lose one very affordable pair of needles.  It was like losing a digit or something.  I probably did start to frighten them.  I wonder if they put them in one of those giant, plexiglass boxes full of sharp, unapproved carry-on items in customs as a visual reminder.  Ugh.  Well, maybe that’s kind of cool: my Denise needles hanging with all those blades.   Maybe I’m a dangerous knitter. 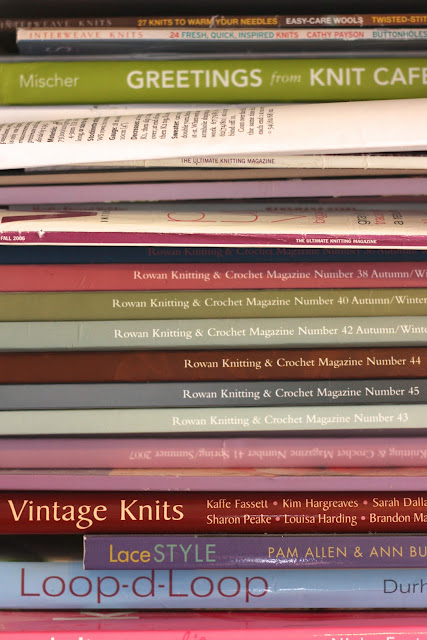 7.  I am a “Big Plans” knitter, queueing  patterns like crazy or hoarding way more knitting magazines and books than I will ever, ever use and wasting time that I could be using for knitting to take them out and polish them with a “my precious” look on my face.  Okay, I know I’m not alone on this one.

8.  I am a knitter in denial.  I live in the South and only wear sweaters a couple of months a year, but that doesn’t keep me from churning out my favorite thing and then shoving them into sweater boxes under my bed for one day…

9.  I squirrel away knitting stuff in any available space.  But, to be fair, I have a really small home.  By everywhere I mean under the bed, behind clothes hanging in the closet, in the garage, in the pantry, on top of the fridge, and in big jars on shelves to double as “art.”  Is this what it’s like to be a pack rat?  Below is my newly organized needle stash under my bed. 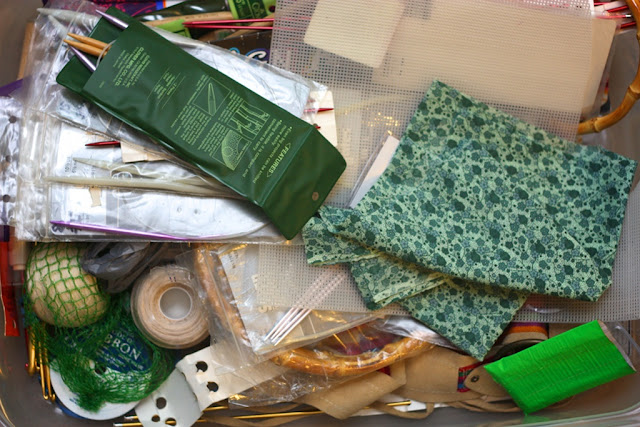 And this next one is the yarn on top of the fridge.  No, that isn’t the title of a short story… at least not yet. 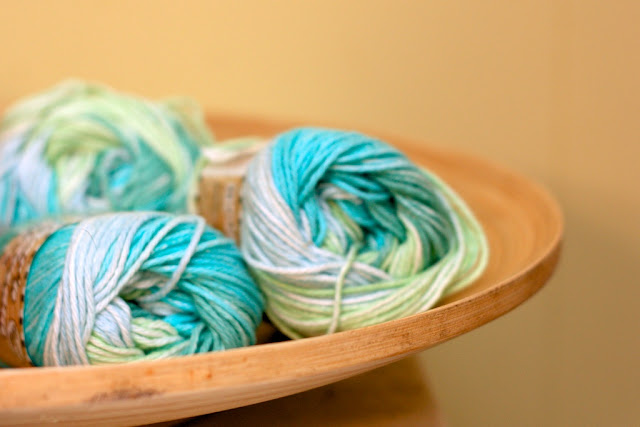 11.  I did give a failed sweater to my cat.  I think she likes it, she’s curled up on it right now, which proves I can be a selectively generous knitter. 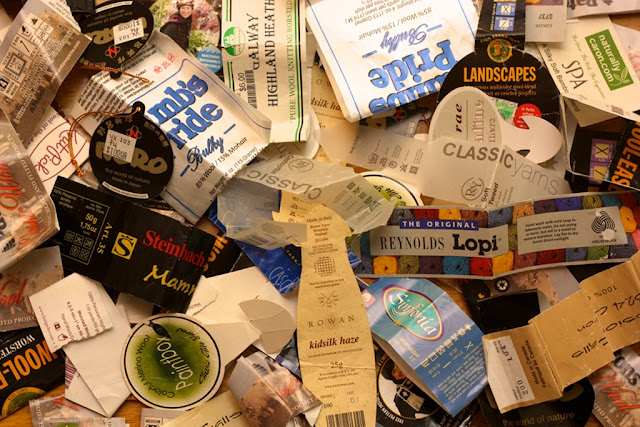 12.   Knitting couch potato – that’s me.  I watch (or listen to) way too much Netflix and it’s all knitting’s fault.  I think I could hide out like a hermit and knit all day, year round if I didn’t have a family.  I’m not saying that I would, I don’t think I’d be fulfilling my God given purpose in life, but I definitely could.

Speaking of God, I have almost absentmindedly brought my knitting into church with me, but didn’t. Does this make me a spiritual knitter? 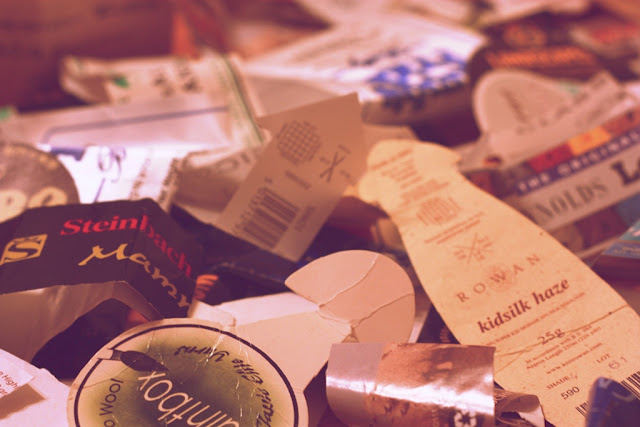 13.  I may do “take backs” with a sweater that I made my daughter who has yet to wear it in the year since I made it, because it’s so cool and wasting away in her closet.  So, there you have it, I’m a knitting thief.

14.  My armpits are often not as neat as I’d like.  Not my actual armpits; I mean the armpit seams on my sweaters.  I just haven’t always paid attention to details until it was too late.  I recognize the contradiction in being way too preoccupied with a hobby but then being absentminded while engaging in it, really I do.  I try to be careful and read through patterns all the way before I get started, but once in a while I overlook critical things and end up either needing more yarn or with Theo Huxtable’s shirt.   Even so, the next time I get yarn and needles out with a project in mind I may be just as blinded to detail because the feeling you get when starting those first few rows is heady for an addict. 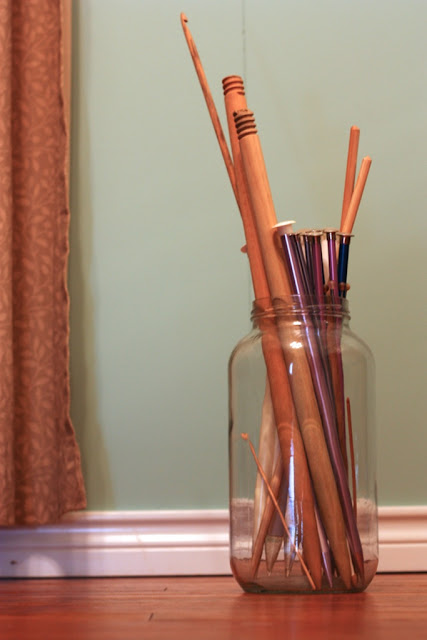 This concludes my very long confessional.  It’s time for a fresh start, a chance to amend my slothful and/or obsessive ways.   I feel so squeaky clean and forgiven I think I’ll put another season of The Closer into the BluRay and continue my second attempt of Knitter’s Death Grip on that un-swatched sweater that I’m making for me, myself, and I because I already have the yarn left over from the first attempt tucked under my bed and didn’t want to actually spend more money.  I’ll probably work on it, with tunnel vision, until it’s finished, or until it’s time to weave in ends, then I might take a long break to stare at my knitting books or internet patterns with the cursor hovering over the Ravelry queue button.   Ah, it’s too late for me; save yourself.

One of My Favorites