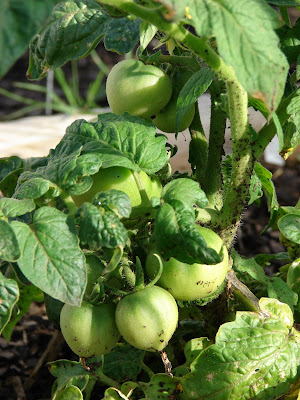 I have much to learn about gardening.  I was disappointed at first when things sprouted, then lingered or disappeared.  When you’re working in a small space on a microscopic budget you shouldn’t expect too much at first.  I think I planted everything on time, but I started from seed and haven’t done that before. In fact, no one I know does that.  I think I under-watered this year, as opposed to over-watering last year in my first gardening foray(Aaaahh!)  So we’re just now getting little tomatoes on our mini vines.

But the good news is that this was an experimental garden and, in that respect, it was a success.  I’ve learned what things I can grow easily from seed in my area (corn, basil, borage, peas, lettuces, carrots, spinach, cucumber, thyme,rosemary) and what doesn’t (tomatoes, eggplant, lavender, peppers, chamomile, to name a few.)  Plus it’s fun to watch corn grow, even if its, like, two ears per stalk.  I can make several salads off of what I have in my garden at this moment- that’s cool.
So, you see, I have traded in phrases like: expect, disappointed, and getting for the zen-like expressions: experimental, learned, fun to watch.
But really I just VANT tomatoes!  Next year I’m planting a big, honkin garden in the side yard.

Freelensing on my Front Porch