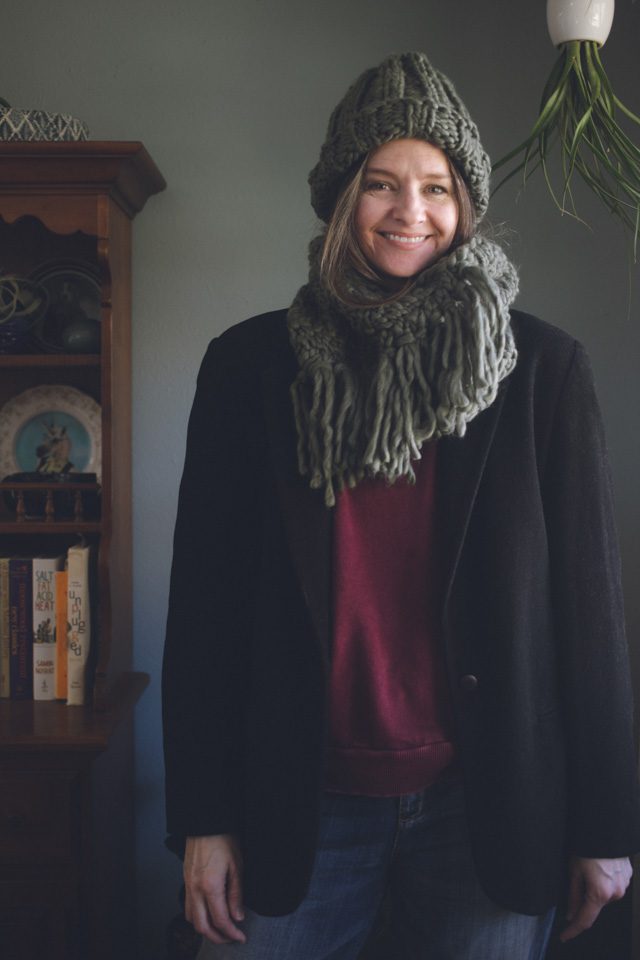 Doing #RecycleReknitRemake with vlog and instagram friends has given me a chance to knit up a few bulky winter accessories that have been hanging out in my queue for years.

You know my obsession with comfort knitting in super bulky yarns? Well, it sometimes clashes against my obsession with affordability, or at least it did when I was buying yarn. (I haven’t been doing that so much these days.) Anyway, accessories are the perfect compromise because they don’t require as much yardage and so I feel I can spend a little more.

I leveled up this time by using yarn I recycled from a cheap mall scarf. The yarn probably is a wool blend but it feesl like the superbulky Drops 100% wool I have used in the past. It’s also in an olive green that I can never get enough of. This will probably always be the most “Me” color on earth.

So I pulled it out in preparation for the KAL and set it aside for the item I most wanted to make, the Durand Cowl. Now I have seen lots of versions of this cowl in all sorts of bulky yarn and as long as the color isn’t too variegated, it always looks good. There are pricier versions in Malabrigo (which really isn’t pricey) and there are several versions on Ravelry in yarns from Michaels, Buttercream from Ye Olde Joann, Berroco Macro, Patons Delish, and Cascade Magnum. They all look really good. But I was excited to have something with an almost pre-spun look to it, like Rasta.

When taking the scarf apart, I set all of the fringe aside and tied it together. I was so glad I did that. It was exactly the length and amount of fringe needed to finish this cowl.

Details: I used US size 13 needles and my recycled superbulky yarn to knit up the Durand Cowl by Tara-Lynn Morrison of Good Night Day. I have no idea how much yarn I used because I didn’t use a niddy noddy before balling it up. I did swatch for this cowl because I thought this type of yarn might take a beating if I knit with it then ripped it back a second time. I’m pleased with the diameter of this cowl. It’s just like the sample. I have seen these made to a smaller gauge and I didn’t want that. I followed the pattern exactly for this and there’s really nothing else to say except that it’s lovely.

I had quite a bit of yarn left over and thought I might be able to squeeze a matching hat out of it. I went with the Siska Toque, from the same book and hoped for enough yarn to have the proper depth.

Details: With the same US size 13 needles and yarn, I cast on for Siska. I ran out of yarn a couple of rounds shy of the length I would liked to have had. It’s not a biggie. Lots of people wear their hats higher on their head than I do, like with this Kenora Toque. I personally like my ears mostly covered and a good size brim, wether or not there’s a little extra peak at the top of my beanie. I think I could solve this by some creative blocking, if I want the extra room at the top, but I probably won’t.

It’s a good length for a  watchman’s style cap. If I don’t worry about folding the brim, it’s perfect for covering the ears and having plenty of room at the top like all the kids are wearing. I’m really happy with it and that it looks pretty sharp with my cowl.

I know you’ve seen Tara-Lynn’s designs before, but have you ever purchased one of her books. The photography is some of my favorite of all my knitting books. Once in a while she has a small batch printed up and available as a real “book” book. It’s nice to have out and it fits well in my bag.

Have you recycled anything lately? These are my first two projects from the March make along. I have a couple more to post tomorrow.

You can see more about my Durand and Siska on My So-Called Handmade Life youtube channel where I plot my recycled knits in Episode 52: Sneaky Extra and Episode 53: Recycle Reknit Remake, then show them off in Episode 54: My Pets Run the Show.

Episode 58: Socks and a Rant