Skip to content
Remember me writing about the Schwinn Collegiate bicycles I got for myself and my daughter here and here?  How I was going to try to learn how to tune up a bike?  Well, last weekend I started working on mine.  I originally envisioned my daughter working beside me on her’s, just us girls, learning how to do something for ourselves while laughing and talking.  But she had just woken up (at noon,) had bedhead, and stood there shifting her bare feet back and forth impatiently.  She wasn’t so enthusiastic. I did make her let my husband show both of us how to take off a wheel and change the innertube.  He was our sensei. 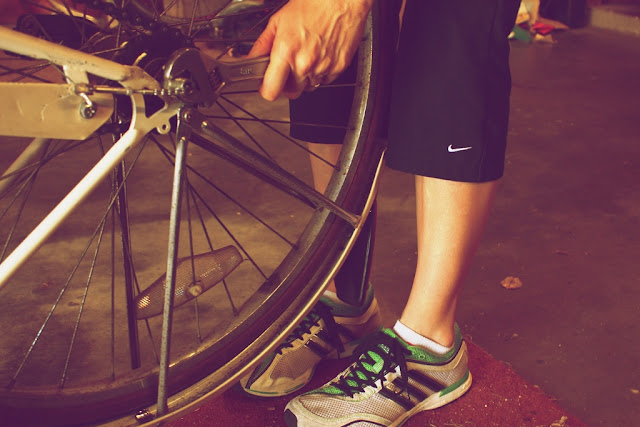 Everyone should know how to do this, but until last weekend, I didn’t.  I may have changed one once with my dad as a child.  Back then I had a “dirt bike” with a padded handlebar and nubby white tires that left a white mark when I skidded to a stop (I always skidded to a stop.) 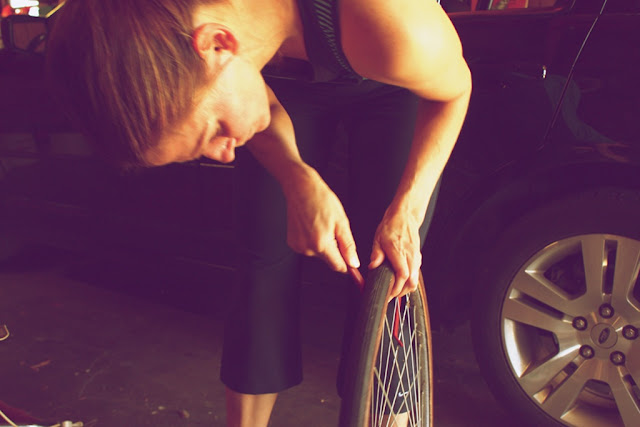 The tires on this Schwinn were from 1981 and dry rotted, so  I ordered new ones in cream for both our bikes.  I didn’t know how I’d like so much off white on mine, maybe I should have just bought white walls, but I thought I would have it painted anyway. 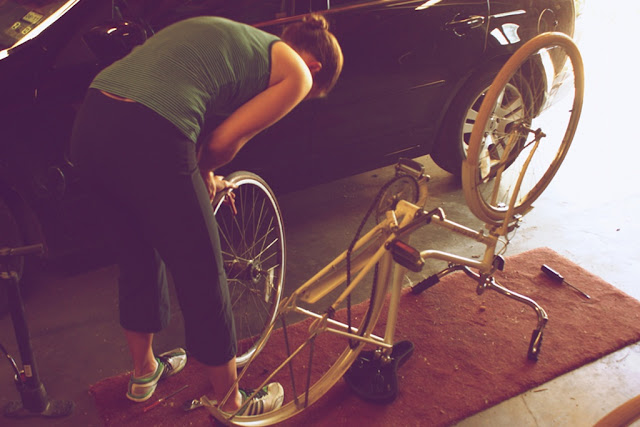 I also learned how to true a wheel.
That’s a fun kind of monotony, like braiding hair or coloring with a child. 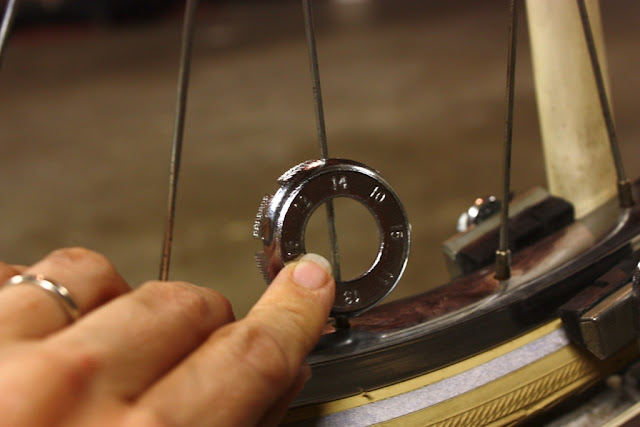 The back fender was a little bent and needed adjustment. 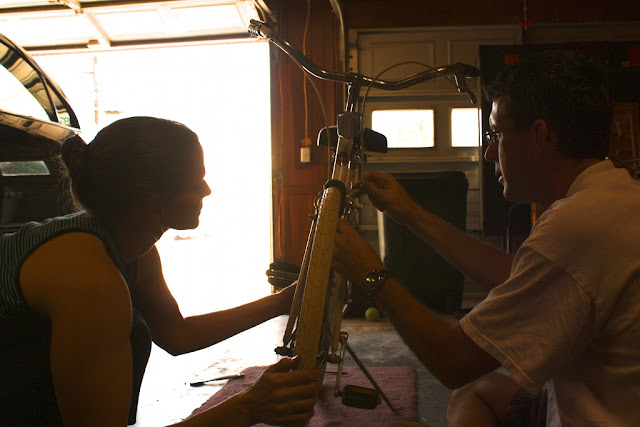 Then I cleaned the rust off of the rims, crank, and handlebars with steel wool and WD-40, then washed it with degreaser.  After a good washing, the paint really didn’t look that bad.  It’s faded in places, but since this is all about diy cheapness, I will probably just keep it.  I did try to dab a bit of matching nail polish over a couple of unsightly scratches, but being off white, it really didn’t cover well, so I left it as is. 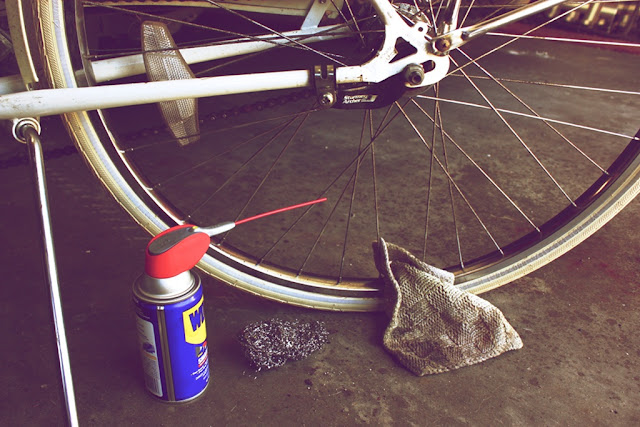 I also don’t want to paint either bike for nostalgia’s sake. They both have all of the old Schwinn decals. 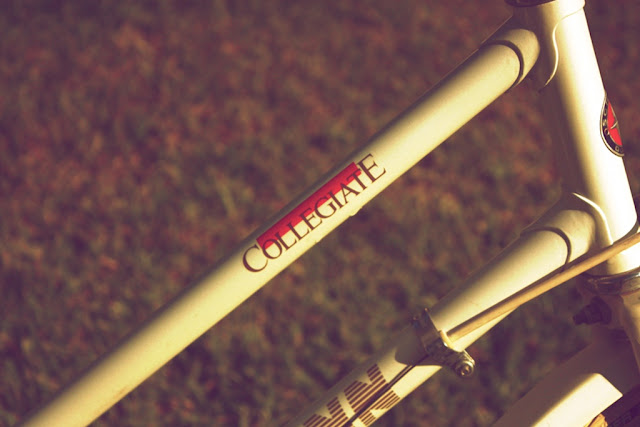 They even have the sticker from Fred Miller’s store where the original owners bought them for their girls.   Fred Miller’s is where everyone got their bikes way- back- when. 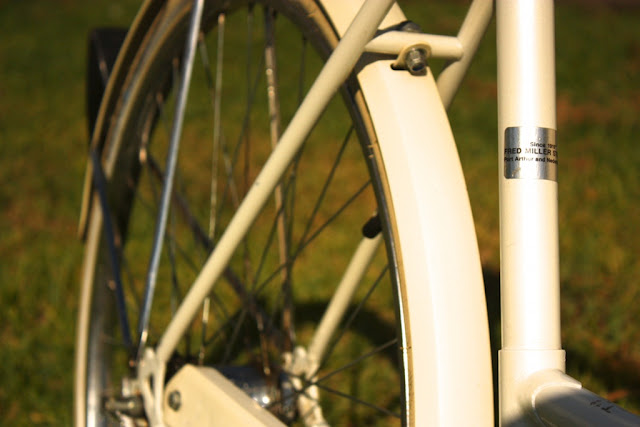 The first time I took it for a ride, I squeaked and squealed all the way to my father’s house.  It was like a rolling, one woman Stomp performance.   Every dog in the neighborhood was howling as I rode by.  I got home, googled squeaky bikes, and waited for my husband to get home so we could center the rim brakes and one pad wouldn’t rub against the wheel.

The next time I rode it was still making a shuffling sound when the chain moved.  I feared I’d have to repack something or other and have lots of tiny things strewn around me on the greasy garage floor, but my husband suggested the obvious- the chain was rubbing against the chain guard.  Once I bent it back in place, I could ride very discreetly (except for the squeaky, springy seat with a cut in it that bounces up and down.)  I guess I need a new one.  I’m thinking about ordering one of these, but I’d really like the old “S” saddle. 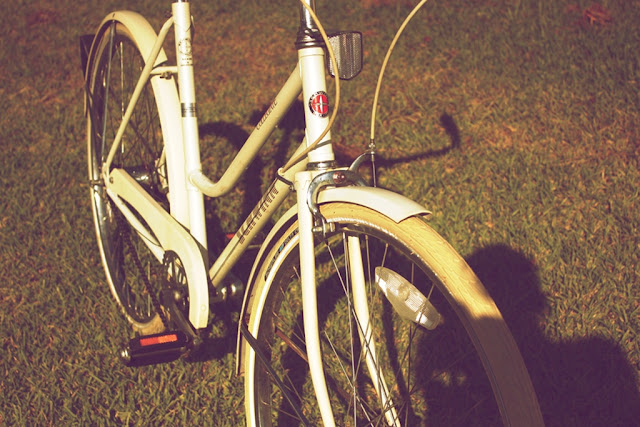 On those thin tires, I shake quite a bit on the neglected, potholed streets of my neighborhood.  But once I get past that, it’s a nice ride.  It’s way more comfortable for my neck and back to be upright on a bike,  like riding the bicycle my grandparents gave me as a teenager.

Today I took it to my dad’s again, down the street I grew up on, past my old elementary school, past the cemetery, under the enormous live oaks that arched over the streets I rode on as a girl.  I was listening to Cornershop and thinking about Junior High, when I listened to Bon Jovi (I know) on my walkman when I rode.  It was a perfect morning.  And no dogs followed me. 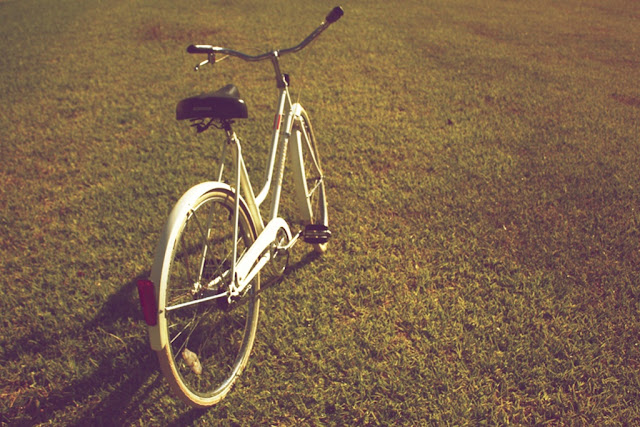 The Whitest of Elephants