After the whole Wupakti thing, we were ready for the grand canyon, I gotta say a lot of this privately owned land off the highway is just as beautiful as the painted desert. But the landscape changed sharply as we neared the North Rim. It looked very Alpine. Though we’d checked the weather before coming, the temp was rapidly dropping below what we’d expected. It was an unusual cold spell for June, we were told. That word again. 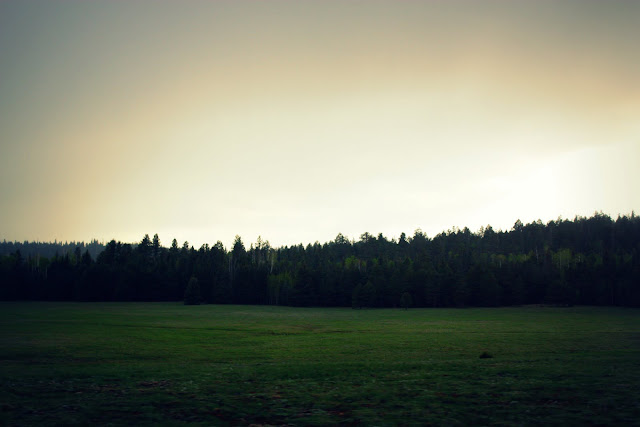 We barely got to our campsite before dark. My husband and I popped the camper up by ourselves because it was now about freezing and the coats were buried under something. So glad I brought those blankets from Peru. 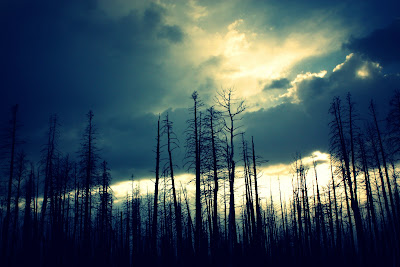 This was the perfect night for “First Day” stew. We huddled around our tiny table like cavemen around a fire in the dead of winter. And most unbelievable, we were mere yards from the rim. 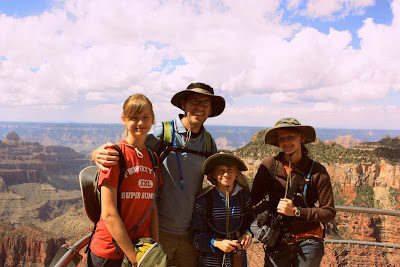 The next morning we walked from our camper to the edge and saw it. The place I’d wanted to see since I was a little girl, watching the Brady’s Westward Vacation. This was our only full day in the Canyon, so we wanted to hike down the North Kaibab Trail first thing. 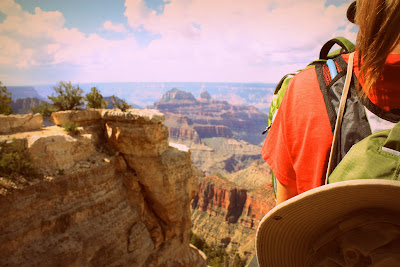 We planned to bring coats, mostly waterproof coats down just in case we didn’t get very far and it was as cold as the night before; but after several Rangers (one of which hikes to the bottom in flip flops) warned us of the super high temps, even after we said we’d probably just go 5 miles down, we left them at the Visitor’s Center and headed out.

I don’t think they realize we are from Southeast Texas. I work out in 100 degree heat with 80% humidity regularly, but okay. 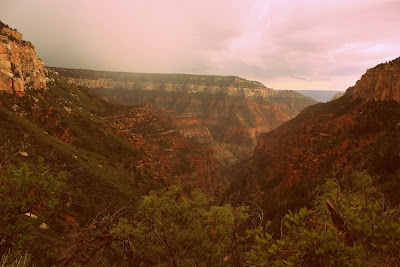 We were about 1 mile down when the clouds rolled in and we heard distant thunder. It was quickly cooling off and a volunteer ranger we met suggested we go no farther than Supai Tunnel (only 2 miles down) because of the weather. By the time we reached the tunnel, we were in a lightening storm. 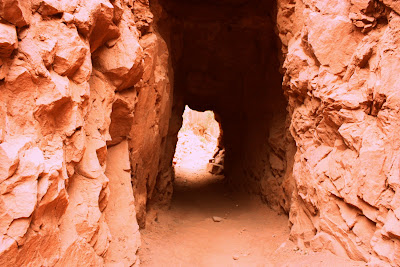 The anxiety I thought I would have over the heights never really manifested. The paths were wide enough and my son understood that straying too far from the canyon wall induced a volley of robotic-like “Hug the wall”s from me, so it was an easy hike. There was, however, a new concern for all of us in the amount of thunder and lightening we were hearing and seeing shortly after beginning. I’d read lightening storms were serious and deadly and that a strike was often preceded by the hairs on the back of your neck rising. If we saw lightening we were to take cover. 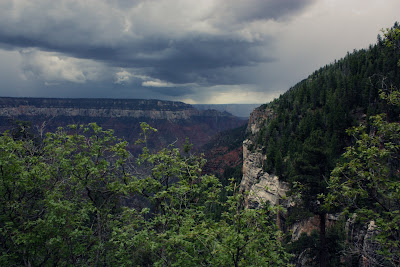 My question is, when you are suspended on a small trail on the side of a steep canyon wall, where is cover?
Basically we just looked for overhanging rocks to shelter us a little when the lightening was continuous. The kids were scared and I was even more conscious of the hairs at the nape of my neck. Plus the temperature was now freezing, we were getting soaked, and I worried about us getting sick.

So, I told them the verse my mother told me to repeat to myself anytime I was afraid: Psalm 56:3, “What time I am afraid, I will put my trust in thee.”
After a few switchbacks and more lightening, we bumped into that same ranger. He’d waited for us to give us plastic ponchos. Our hero!!

My son perked up immediately and explained to us how things like this aren’t just accidents or coincidence. Shortly after that it quit raining (yay) and started snowing (huh?). 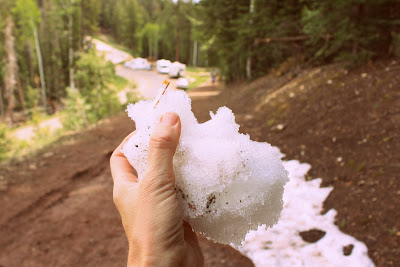 Honestly, I wasn’t really that worried about lightening, and I could’ve gone 10 miles in this easily by myself. But, my biggest worry was the family’s lagging morale. 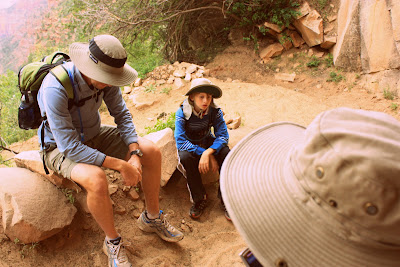 They didn’t see as much as they’d planned and the steep climb up was hard. (Now we understood why the people trudging up past us, earlier, as we skipped down, weren’t all bright and chatty.) However, the kids mood improved greatly with the gift of ponchos and the trailhead in sight. 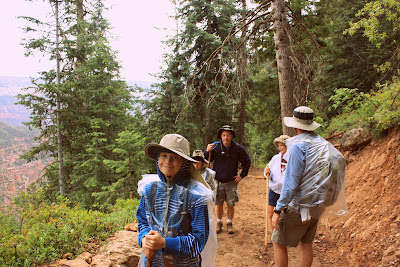 When we got back to our camp, we just sat in the truck with our heater on, answering texts as slowly as we could.
After a while we noticed the truck next to us was full of kids whose tent had gotten soaked, doing the same thing. That group was also headed to Zion next. It was pretty neat to meet people from all over the states or world, traveling the same beautiful trail down the canyon wall as we were. The same trail explorers and natives had for hundreds of years.

After thawing, we used the pay showers and thoroughly enjoyed our full 8 minutes of hot water. Then we topped that indulgence off with a piece of awesome vegetarian pizza and bottomless hot cocoa at a shop by the Lodge. 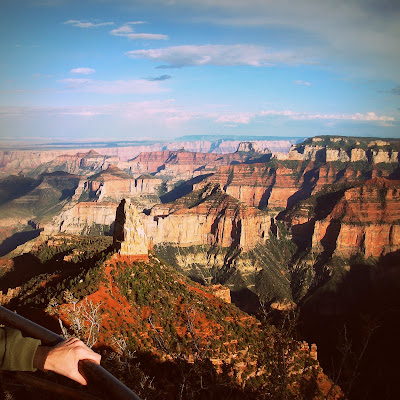 Driving to Point Imperial and Cape Royal was a good opportunity for me to play with all the cameras I’d brought, as the whole shake- the- polaroid- in- the- snow -and- rain- thing didn’t work so well. 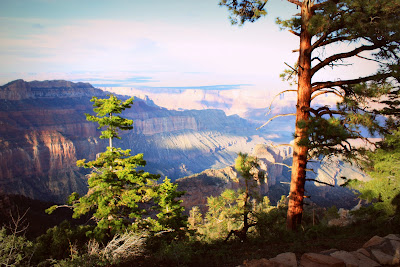 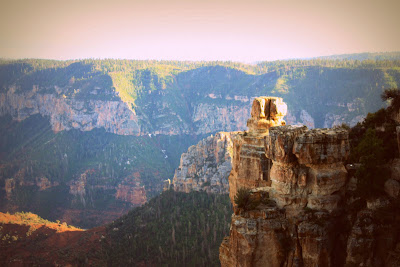 As we drove these mountain roads, I also remembered stories of my dad, taking 30 minutes of fearful shuffling just to get from the car to one of these lookout points. Or how his cousins said Hail Mary’s and cried from the floorboard of the back seat as his uncle drove up Pike’s Peak. How funny we’d seem to people raised in the mountains. (I’m remembering a guide in Peru who thought my fear of heights odd) Some people are just sea level folks. 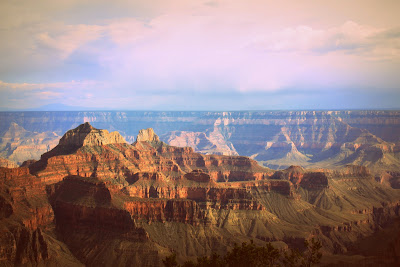 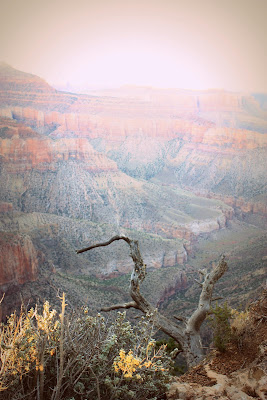 With it being this cold, we spent our nights at the Grand Canyon bundled up together, reading. I was so glad I’d brought some ghost stories of the southwest and an Indian legend to read from each tribe whose land we’d passed through. My husband and son conked out early, but my daughter and I would stay up reading and talking together in her bunk.

Once we were ready for bed, the winds at night were so powerful there that they rocked our little camper to sleep. There is nothing better than a pop up swaying in the wind, except maybe a boat.

I want to go back there one day, when the children are older, and hike all the way to the bottom to spend the night, Brady style.