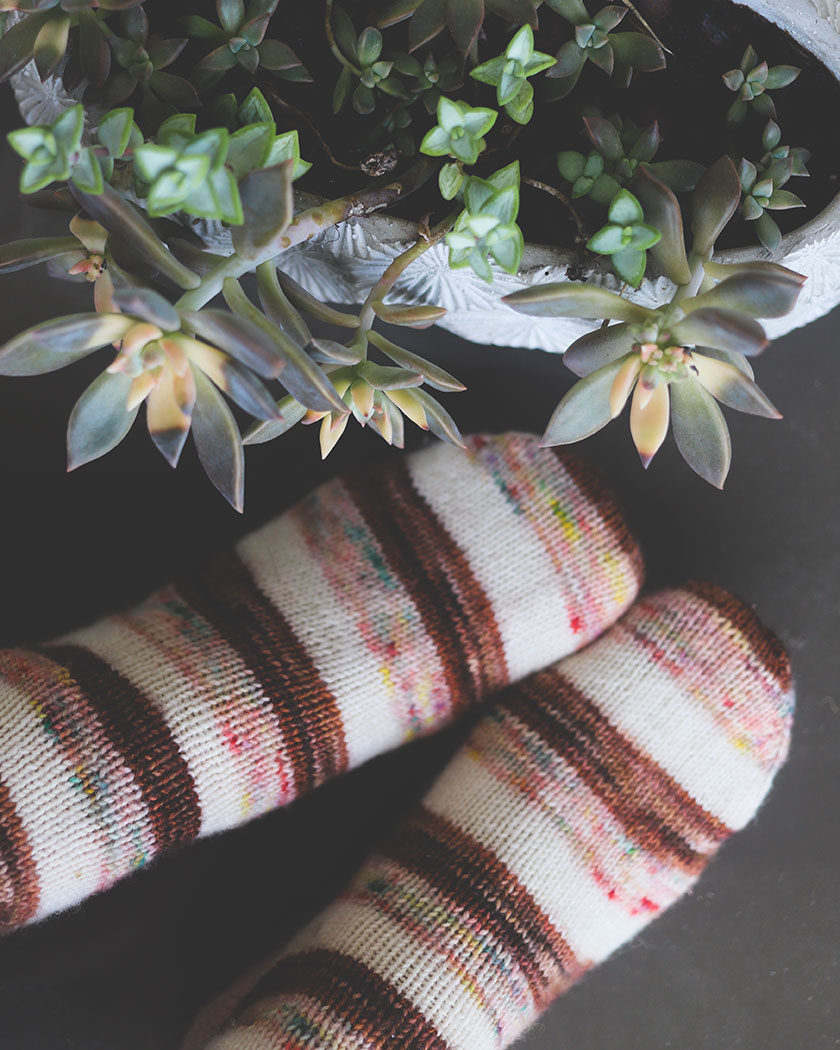 It was definitely the base: it’s a super soft, plump and sport weight. The sport weight thing is probably the key for me. It is full enough to not give me Knitters Claw if I knit with size 0 needles for too long. I could literally have a sock project going all the time if I used this yarn, with no RSI issues. However I don’t really need a thousand pairs of hand knit socks and Gynx Yarns is no more, so I will just savor the few skeins I have left.

Laura’s podcast, The Dyer’s Notebook, was one of the first video podcasts I ever watched. I had absolutely no interest in learning to dye yarn, yet I enjoyed hearing her talk about it and her color inspirations. I’m not alone in that because sooo many dyers were inspired to open a business because of Laura. She freely shared techniques and gave advice, as well as hosted dye-alongs. That’s just not done anymore. Though everyone borrows from everyone, at least a bit, online, most do not share trade secrets for fear of losing an edge. It’s not an irrational fear, but I love that Laura never seemed bothered by it.

I miss her anime-specific color ways too. Lots of dyers are doing that now, but I think she was one of the first. Her Totoro 2 color way was among my first indie yarn purchases. I used a Aran skein to make my Rainbow Slouch hat, below. Just before closing her shop, Laura put both old stock and new on sale and I was able to get a few more skeins. I still have my miserly stash of Catbus, Mononoke, and a Studio Ghibli mini set to work up into something special one of these days.

Details: As usual, I used the Smooth Operator pattern by Susan B. Anderson and size 0 bamboo circulars. I cast on for a 56 stitch sock and used the contrast pink yarn, provided in the Strong Sport set to make the afterthought heels and cuffs. I’m pretty sure I used the Old Norwegian cast on method (which is basically a Twisted German cast on, right?) I then knit the cuff on 1 x1 twisted rib.

I knit Kitchener heels and toes and used Susan’s no gap heel method, ll of which are in her perfect pattern. I’ve talked about using this pattern before and I just did a massive vlog on it, so I’ll spare you any more detail. Perhaps you’d like to see more photos of my socks in my yard?

This post makes me wistful- wistful for the days when I first discovered indie dyed yarns, wistful for Laura’s base, and for my old garden (where this last pic was taken. Yes, the exploding refinery was belching just behind it, in the distance, but the garden itself was pretty sweet. ) It’s been 4 years since Laura stopped dyeing and that’s long enough for the yarn to now evoke nostalgia, right?

Anyone remember using this base and have any good substitution ideas for one day when I need more sock yarn? I have been wanting to try Nomadic Yarns’ Twisty Sport to see if it has a similar feel.

More on my Gingerbread House Socks on Ravelry

and on my youtube channel: Episode 32: Doing Nothing, Episode 35: Endweaving Party (I think was just a cameo in my weird Dance Party Mix ), and Episode 37: Totally Baked

Out of the Queue, Onto the Needles

The End of The Tunnel