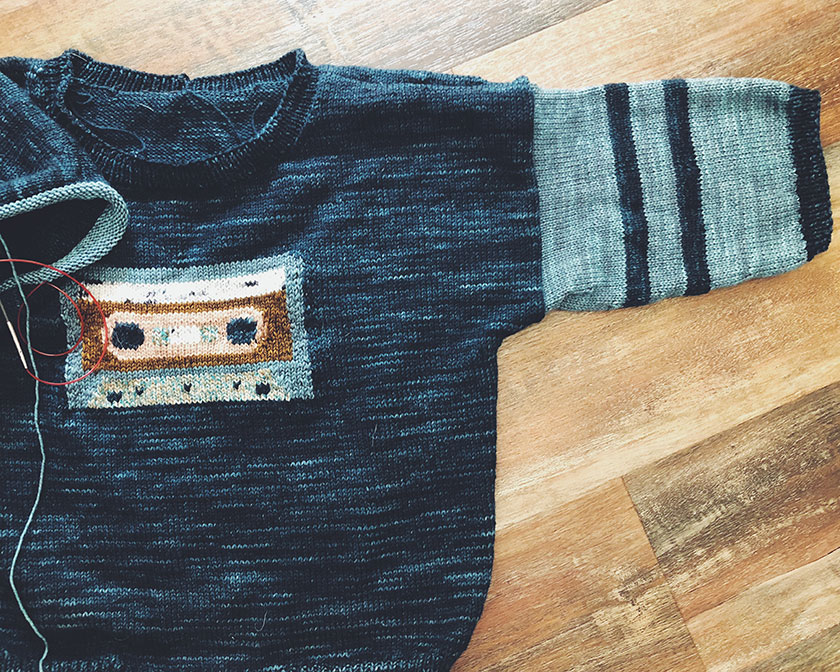 I’m feeling the late 80s/ early 90s vibe of this test knit for KnittyJo. I want to thank the instagram friend who recommended the teaser photo to me (You know who you are!) I never tire of a healthy dose of nostalgia.

Jesie’s sample is in very eighties colors and if you peruse the finished objects on Ravelry you’ll see lots in retro colors, one even mimics the yellow and pink color blocking on Memorex cassettes back in the day! But this doesn’t have to be a flashback project or even a mixtape. One tester just named her tape after a favorite album and plenty were not in 80s brights. This project can be personalized in so many ways.

I knew I wanted to use stash so I dove in for the right amount of Dk weight yarn and found Tosh Longrider Dk in Dubrovnik and a complementary OOAK Dk Twist skein in lighter blue. These constitute the bulk of the sweater. The rest is very scraptastic, which made it perfect for the #ScrapsAlong2020 mal with @norichanknits. This is an ongoing scrap-along, so you may be interested in joining in. (If you’re too busy to start another thing, Noriko also accepts pattern donations for knitters who can’t afford to purchase one right now. That’s pretty cool.)

Other than the obvious coolness of this design, I also appreciated learning the waste yarn tubular cast on. How have I never done this before? It makes the tubular cast on easier for me when I’m highly distracted. There just seems to be less to keep up with.

So, details on my mixtape:  I used size US 1s and 3s to knit this size 43 inch bust. I used mainly Tosh Longrider Dk and Dk Twist. 43″ was the only size available when I looked into testing, but I’m now very glad I went with that size. I like positive ease, and it doesn’t get any easier or cozier than this sweater.

It’s meant to be a short sleeve sweater tee, but I don’t have much use for that. It is either miserably hot where I live or I am cold, not really an in-between. Of course, it’s mostly on the miserable side.

So, I modified my top by adding three-quarter sleeves. The stripes were a necessity when I thought I would run short of main color yarn, but I’m glad I added them because it rounds out the whole re-living my childhood moment. It has an oversized football jersey feel.

To lengthen the sleeves, I picked up the same amount of stitches as directed in the pattern for sleeve ribbing, only I carried on with stockinette. The stripes went as such: MC for 27 rounds, contrast stripe for 6, MC for 10, CC for another 6, then MC for 27. I then finished with the ribbing as instructed. I worked 5 decrease rounds within the sleeve starting at 2.5″, then every 1.5″ after that. I am so pleased with the length and fit.

I have done intarsia once before, so I did remember how I anchored the yarn a stitch or so before using it and a stitch or so afterward, even when moving directly upward in the motif. I mean, I think that’s how you do it. I don’t actually know that I’ve looked it up. Like crochet, it is a blessed mystery that I enjoy fiddling with until I like the way it looks.

The last and perhaps the biggest hurdle was choosing a title for my tape. I pulled down a couple of boxes of cassette tapes I’d been demagnetizing from the age of 6 to my thirties. There were a lot of seminal bands and albums that I could have chosen, especially to represent that era of my life. The one I felt the strongest urge to use was Upstairs at Eric’s by Yaz. It kind of solidified my love for electronic pop music, and it was just so groundbreaking with the odd “I Before E except After C” interlude, artsy cover, and pioneering use of computers in music. But it is a mixtape tee… and I had plenty of those to draw from for inspiration.

I picked through the early mixes from like 4th grade where I would record some iffy songs I didn’t fully understand and unwittingly play them around my mom.

I saw some  Duran Duran in there, some Prince, Salt N Peppa, Peter Gabriel, Young MC, Michael Penn, Robyn Hitchcock and the Egyptians, and ViciousPink.

That homemade cover for Abbey Road, recorded form a friend’s scratchy record (scratchy records will always be my favorite wayto listen to The Beatles). There were a few mixes I made for my kids just before we quit using cassettes forever.

There were more DIY covers and song inserts for for summer vacation my junior year, for driving to Houston, etc. They usually spanned genres and were sometimes made with the intention of torturing passengers in my car (freeloaders). It doesn’t get any better than trapping a group of metalhead guys in a car with Kate Bush playing for an hour. Ah, horizons were broadened…

In the end, I chose to use a title I already had on a mixtape of songs recorded from Red Jacket in Dallas on Red Square Retro Night. It was a weekly tradition in the late 90s and early 2000s to have a “retro” night of electronica from the decade before. Works for me.

As for the embroidery, I just fudged it using backstitches because I was pretty impatient to complete my tee.

If you want a taste of Red Square Retro, I found this recording and this one made on cassette, via a Dallas radio station in 1998.

Walks Around the City

I Have a Problem