I love this little top.  It was what first made me want to subscribe to Holla Knits.  So simple in design and technique but with unique, hand knit details that make it special.  Plus look at all of those great blues, and stripes, and the fact that it can be worn year round in Texas. 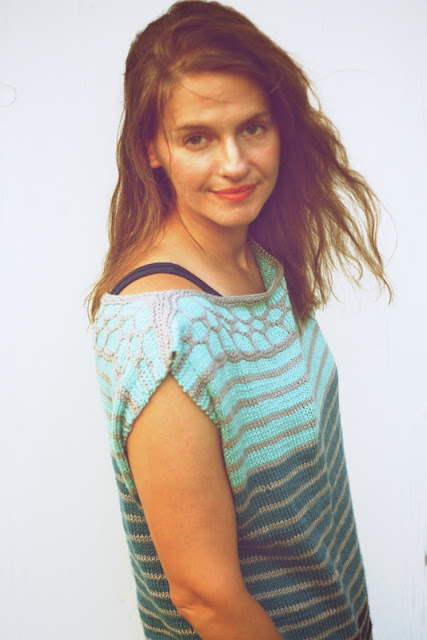 There is an instructional video, a fun extra to give a girl courage, available to subscribers that demonstrates the honeycomb stitch along the top and bottom edge. 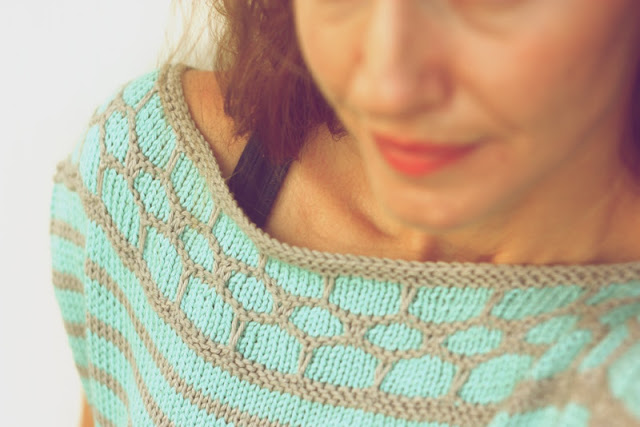 The whole thing could have easily been done in a few days, but I have this tendency to go at things a little like Jethro Bodean (big, stupid grin on my face as I move full speed ahead in a state of bliss, heedless of everything around me) so, after knitting much of the front, I realized my garter stitch stripes weren’t nice and even, but looked like the reverse side should.  After I separated the front and back, I had joined yarn from the wrong side to start working the front. In other words, I ignored a knitting basic.  But it didn’t take long to reknit that part, and the colors are soothing so it was no biggie. 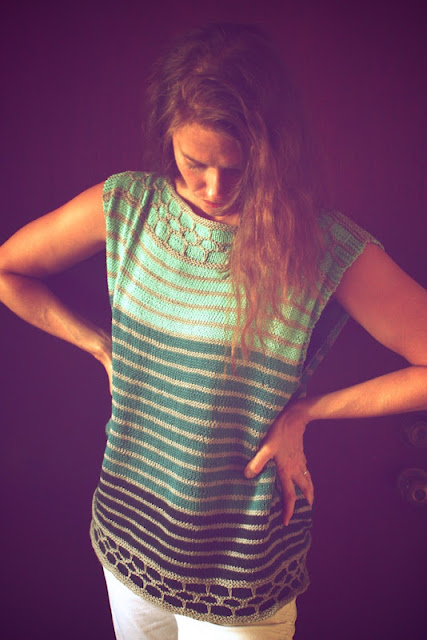 The design seems so versatile with all body types that, for once, I felt like I could just relax and knit stockinette and garter without worrying about modifications or shaping.  And I did. 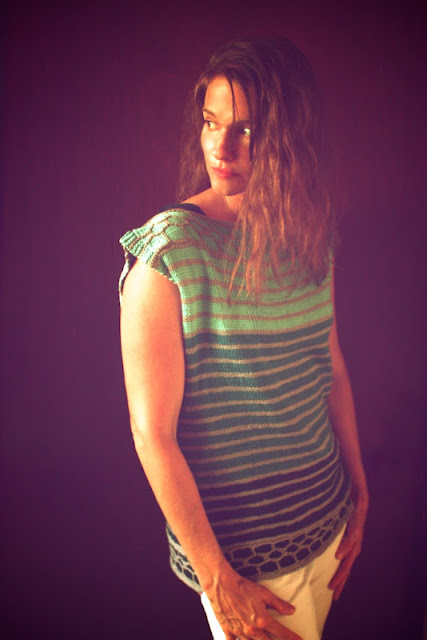 My one modification was to add an extra stripe to the middle contrast color portion, before dividing the piece for the armholes (11 total stripes here, instead of 10) because my gauge was a little off and I didn’t want a crop top. 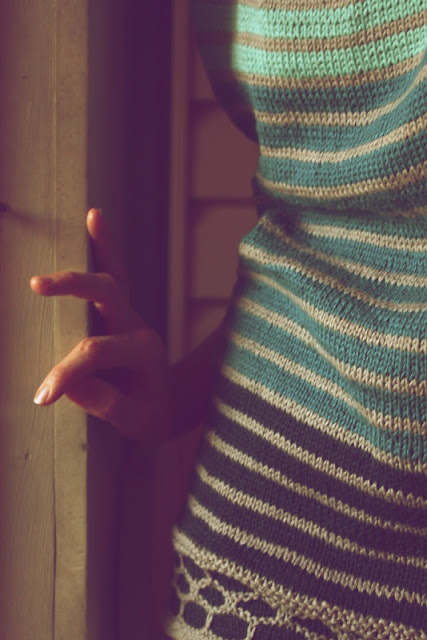 This was my second time to knit something for warm weather.  I wasn’t sure how the Comfy Sport cotton/ acrylic yarn would wear.  But, it is very lightweight and doesn’t seem to have stretched out much with wear.  I was a little nervous about weaving in all of those cotton ends because they don’t  “grab” onto the fibers around them like wool does.  So, I found two ways online to handle them:

1. Split each individual end in half and tie them around a purl stitch “bump” on the inside, pull tight, and trim.

2.  Split in half and weave each half separately, skimming (or splitting and sewing through) the purl heads of several stitches in a row on the reverse side before making a u-turn and skimming through the purl heads of an adjacent row from the opposite direction.  That makes no sense, so watch the tutorial if cotton end weaving fascinates you. 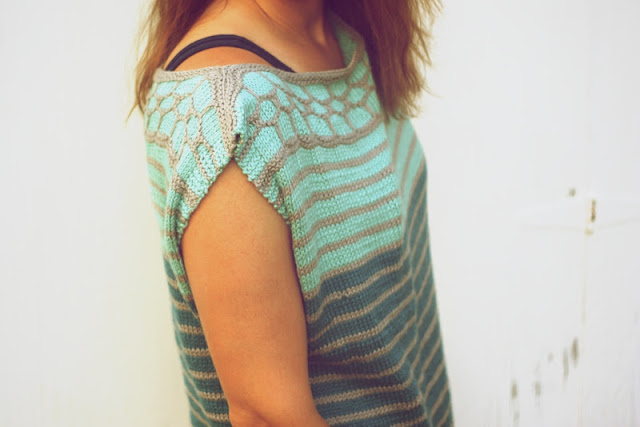 The first just sounds too easy to be good, but the kid in me really wanted to do that with all of those loose bits.  I also messaged the designer, Allyson, on Ravelry for suggestions, but instead of waiting for the answer I got that Jethro look on my face and powered through method number 2.   Yes, I listened to the “mature” knitter in me, which gave me double the normal amount of ends to contend with.  At one point during the process of splitting a zillion threads in half and winding each little part around and around on the back of my work, I found myself wondering if this was a psych experiment.  Maybe that web site was just messing with us to see who was insane enough to do this.

I said mature knitter, but actually I still had four ends or so hanging commando on the inside as I took these photos – it was taking forever!

My knitting photos are always a sort of Where’s Waldo in which you can search the photo to find the loose yarn ends sneaking out of various openings.  Below, is my tribute to all of the knitters who’ve edited out yarn ends. 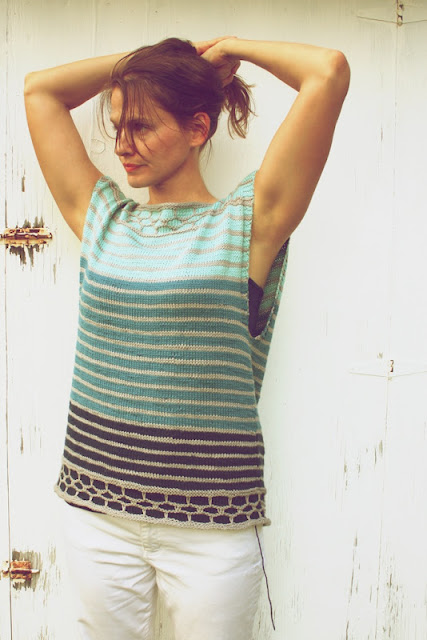 If only I had waited for her reply.  (By the way, thanks for replying, Allyson!) Turns out Allyson just ties a few knots away from the edge of the garment on the inside and trims the ends when there is positive ease.  No splitting.  No maturity. That’s even easier than option 1!

Why didn’t I listen to my inner voice or at least wait for direction?  Anyway, one million yarn ends later, I am an expert at skimming and love my Umbre Lovre.

My Thoughts While Burrowing