Skip to content
This is Caramel, Deux.  The original is a semi-felted, shapeless mass drying on my table.   I get a lump in my throat when I look at it.  I’m either going to cry or vomit.
This a real tale of woe. I put in some serious knitting time on this the last month in hopes of wearing it for a Christmas cold snap. I did wear it, for all of one minute to show my husband.  It fit perfectly and was all warm like a blanket cardigan should be.  I was smiling and thinking phrases like, “It pays to work hard and do it yourself.” I didn’t even take time to take a picture before quickly setting it aside for ruination.  Ruination is the new blocking, didn’t you know?  At least it is at my house because this is my second Miracle Grow Sweater.
If there’s a bright spot in this, it would be that at least I’ve learned that knitting a test swatch isn’t enough. I have to wash and block it too. I have been knitting long enough to know this and this is super basic information. I know I read about it in my first knitting book, but I never did it,never had a problem, and so forgot. 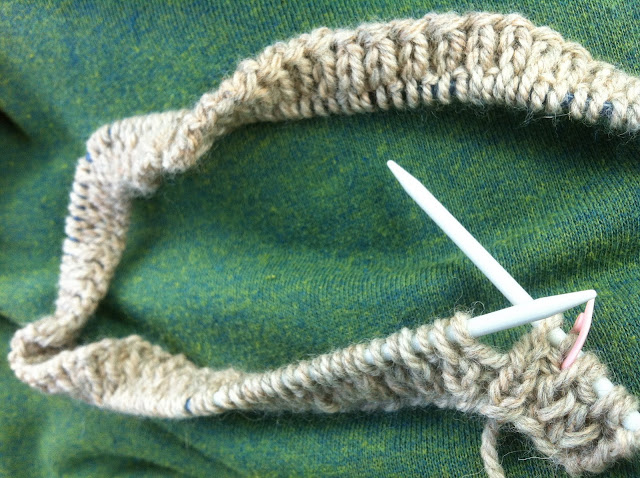 Not washing the swatch is the reason I prefer my daughter’s Mrs. Darcy sweater to mine: hers was made too small for me and when washed was good for her size and mine.  I used a different yarn for mine and after washing, it grew longer and wider and, though it is still sharp looking, isn’t as fitted as I would have liked.   I actually thought it was a fluke, from using an unfamiliar yarn or something. But now I realize I was skipping a very important step in the annoying, joy-killing process of knitting preparation.  (You know, where you experiment with needle size and yarn to make sure you have as many stitches and rows per inch as the pattern calls for, knit up a 4 x 4 test swatch, reknit until it’s perfect, wash it, and wait for it to air dry in order to know if the stitch gauge has grown as the wool “blooms.”)  My suggestion is to start early with your swatching, maybe before you’re even finished with the previous project, so when you have that weekend to work on a sweater, you won’t just be sitting around waiting for your swatch to dry.   Some even suggest a bigger swatch then 4 x 4 so you can get an idea if the weight of the fiber will pull the sweater out of shape.  Then you have the excitement of drawing up new plans and calculations to take this weight into account. 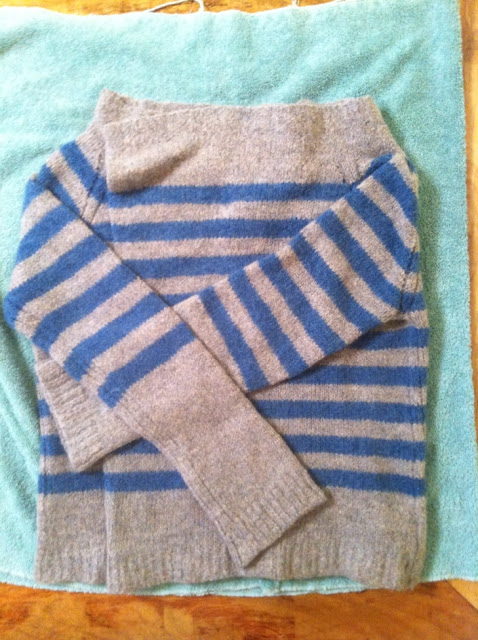 (First caramel in my Ravelry.  At least my cat likes it.)
As I said I’d just forgotten about the need for all of that and knitted away, churning out this blanket sweater in no time.  But when I washed it, it turned elephantine.  So I tried hot water to shrink it up just a little.  I should have tried the dryer first, but I had no luck with my first Miracle Grow Sweater in the dryer, so I skipped it.  In the hot water it did start to tighten up without losing too much drape, felting only slightly. 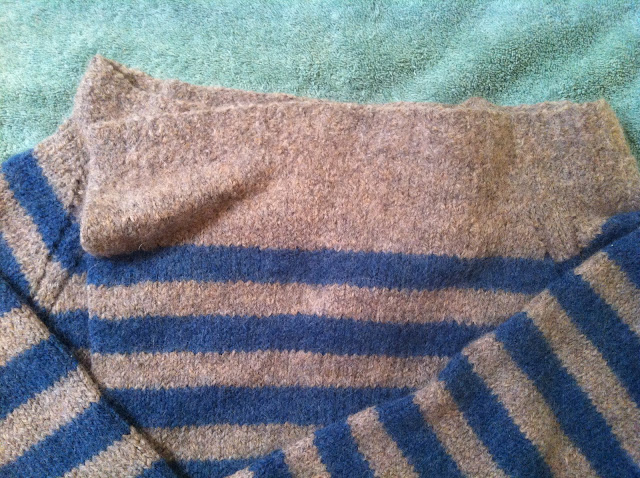 At least the stockinette did.  The k1,p1 rib didn’t budge.  So, now the sweater was better in fit, but the edges were all billowy.   I had visions of myself in Michael Jackson’s flap collars, and it wasn’t pretty.  I then tried spot felting the ribbing.  Is there really such a thing or have I made it up?  It only thickened in a way that made the neat little ribbing imperceptible. 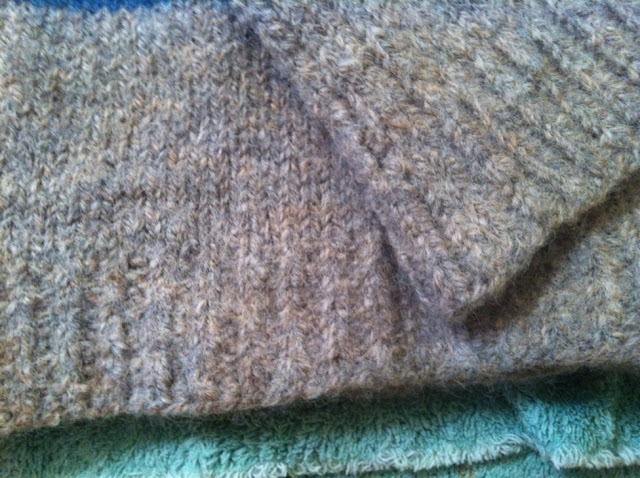 So, the top picture is where I’m at on my second try at this sweater; that is not too far.  But it is too good a pattern not to knit right.  I hope I don’t get bored the second time around.  But I just can’t let it go with the piece of felt on my table, blanket- like though it maybe.  I really want to make this and wear it.
Today, I want to get past the armholes so I don’t give up.  Sounds like a Netflix kind of day to me.

Year of the Sock