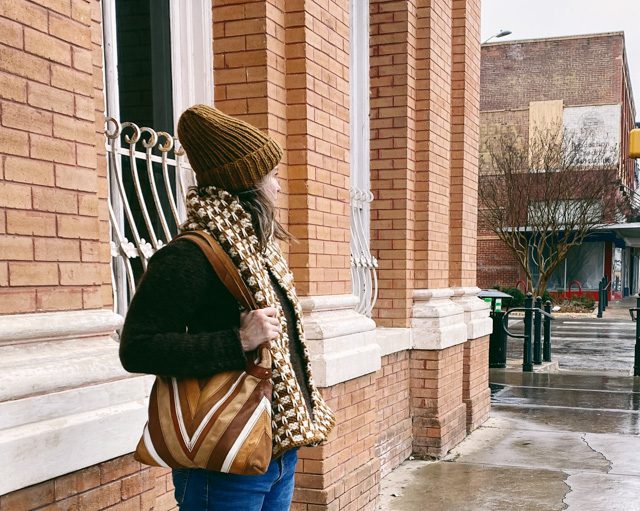 This scarf comes from a collegiate themed collection by Alexandra Tavel. Think Ali McGraw or Felicity.  The inspiration for her collection brings peacoats, pleated skirts, and new, pristine notebooks to mind.

It’s an easily memorized pattern, so it doesn’t require looking down too much, which is why I watched tv the whole time I worked on it. Slipped stitches do keep things a bit more interesting than a plain striped scarf. Despite all of the Keri Russell and Love Story vibes, I watched Seinfeld while working on it. (We are going back and watching all the episodes in order, because we are healthy like that.)

Details: The Graduate Scarf takes two balls each of two different contrasting bulky weight yarns. I used two balls each of Hue and Me yarn in the Salt and Arrowwood colors. I already had a hat in Arrowwood so I ordered a kit in the sample colors to complement it. Now I have a matchy matchy, school colors kind of thing going on. I thought I’d use most of the yarn, planning to knit it until I ran out, but I stopped a bit after the directed length because it was already massive.

With the remainder of each color and US size 10 needles, I knit a striped Seafarer’s Cap as a gift- another pattern with school color vibes. I just striped randomly, no real plan except to use up all of the yarn. Lately I’ve been trying to use every last bit of a yarn  that’s left over from a project before moving on. Sometimes I make socks with it, or put it in the scrap crochet blanket bin. This time I knitted an accessory as a gift.

Have you tried Hue and Me yet? I think it is my favorite yarn for gift knitting, other than super wash sock yarn, as it is easy care and works up pretty quickly for someone like me who often waits until the last minute to decide I’m going to make a gift.

Some other patterns from Alexandra’s collection that I’d like to try are the Library Wrap and the Campus Cardigan. I already have Lion Brand Just Hemp that I can use for the Rec Club Backpack, which I hope to make sometime for summer.

So I think we are in season 4 of Seinfeld at the moment. The more I watch, the more I am convinced George is the most horrible, and therefore, the best character on the show. Other shows we’ve been watching weekly are Raised by Wolves and Severance. Severance has an old fashioned mystery/thriller feel to it, sort of like Homecoming. We are always disappointed when an episode ends. Also, I adore Patricia Arquette.

I’m not sure what to think of Raised by Wolves. I love sci-fi, the storyline seems all over the place but that’s not necessarily a bad thing. Sci-fi shows that constantly introduce new “world rules”can sometimes get silly. Same goes for shows with heavy religious imagery (This is supposed to be based on the Book of Enoch. Have you ever read that? I haven’t.) Religious caricatures in sci-fi are so often cornball, but it’s good so far and I’m invested, even though I’m tired of Travis Fimmel’s wild-eyed Ragnar expressions. Sidenote- the opening animation and theme song is so very good. As I watch it, I’m reminded of my son’s thoughts on Dune: that it was peak me.

See more on The Graduate Scarf in my Ravelry.
and on My So-Called Handmade Life Podcast Episode 51: Hopeful, Episode 52: Sneaky Extra, and Episode 53: Recycle Reknit Remake.

And more of my striped Seafarer’s Cap on Ravelry

and on the podcast Episode 52: Sneaky Extra and Episode 53: Recycle Reknit Remake