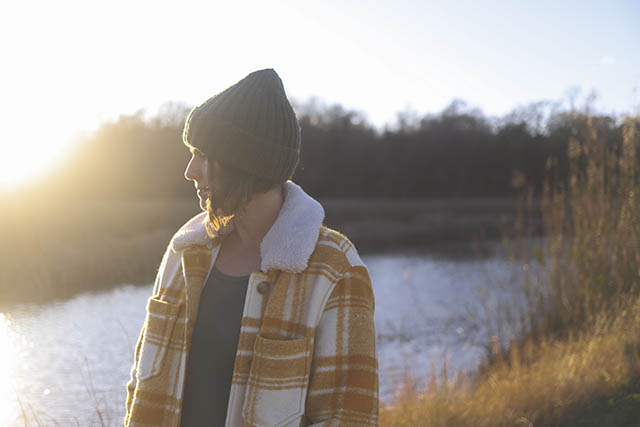 There are lots of firsts here. Voyager Cap is my first pattern to knit by Alexandra Tavel, or Two of Wands. It’s like a classic beanie with a little extra something- like space between the top of my head and the top of the cap.

I’ve been a little fixated with Alexandra’s patterns lately. I’ve seen them for a while and it’s like once I knit one, I had to knit them all. Beanie as gateway pattern.

Another first for me is this Lion Brand’s LB Merino Camel yarn. I’ve never used camel or an LB collection yarn. I felt all kinds of swank-ay as I made this. the camel seemed to make it a little slippery compared to regular wool, but it was no big deal.  I was about 2 inches in and realized my gauge was getting off and I’d need to go down a few needle sizes. It didn’t take long to get back to the same point in the pattern.

My thoughts on this yarn: It’s nice. It’s softer than regular wool and especially softer than Wool-Ease, the Lion Brand yarn I am most familiar with. Lion Brand acrylics were once my only stash yarn.  AS I was exposed to online yarn sites and as the indie dyer market exploded, that changed. I veered away from it, craving all the color and real animal fiber. But something has happened in me lately and I find I’m intrigued by patterns that use Lion Brand and are completely stylish. I think how much I would’ve appreciated those designs when I was using Wool-Ease for sweaters and scarves. I’ve felt a desire to use the remnants I have in my stash and even to get some new balls of Thick and Quick for a few bulky sweater and accessory projects. I think it feeds my nostalgia for the old days of knitting, when I first learned and I was so proud to make something useful while also saving my family some money. It may also be a desire to support designers who often make patterns free and show them in affordable yarns for people who can’t, or don’t want to, drop a heavy dime on a sweater. It’s not the same, since I still have a stash, but there’s a comfort to using it.

A lot of Alexandra’s patterns come in kits on the Lion Brand website and they often have 30-40% off sales on them. It’s like Knit Picks’ book sales, one or the other is always happening. 40% off makes this even more affordable for both yarn and ad-free pattern.

So this was my first time to use one of their kits. Apparently, I really enjoyed it because I ordered a few more, like Winds of the Atlantic, Crossbody Canteen Bag, Campfire Blanket Scarf and a couple of summer tops at 40%- 50% off. Winds of the Atlantic is an oversized crochet vest/ cardigan that I am inordinately excited about trying. It will be my first crochet garment…unless a Superman baby cape counts as a garment. In fact, I think it was all of the seemingly beginner-friendly crochet that initially drew me to the Two of Wands patterns. She’s also really good at working instagram.

I’m also knitting a blanket put together by Alexandra and Lion Brand, in which she designed some of the squares in both crochet and knit. I know, another pattern of hers… and another blanket. I realize I sound like a member of a cult at this point.

Now, here’s what I love about this hat- There’s the affordable yarn that’s also really soft, like I said.
There’s also the clean lines and cute decreases up to a little point. I love that even with the extra length on top, there is still enough fabric to fold the brim and keep my ears warm. Were you to not want the pointy top, you can always just omit the rounds that would make the part of the brim that folds up and it would fit like a regular fitted beanie. So it’s basically two patterns in one.

The pointy beanie look had to grow on me. I think I like it in this cap because it is a sport weight and not a heavier. It’s cool. I’m not saying I’m cool because I wear it, but it is cool. Actually,  I felt a little like Nicky on This is Us.

Possibly, a good night’s sleep could fix that. But it’s like 2 in the morning right now as I hurry to finish this. It’s now or next week. And waiting til next week is why I haven’t blogged in a long time. :/

So, I feel really good about writing a post after a long hiatus. I have to keep the momentum going, which shouldn’t be hard because I have like everything I knit last year to post about. I’ll become known on instagram as that lady that knits a sweater a day. Be prepared to be spammed with FO posts!

Soap Queen, I Think Not